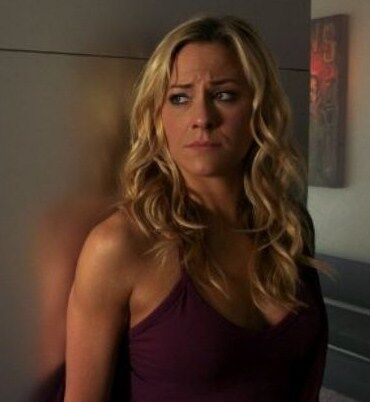 Candice is a character from the Skyline film. She is portrayed by Brittany Daniel.

Candice first appears in Skyline having taken a shower and complains to her boyfriend, Terry about Denise's presence every morning. Terry then lies to Candice that Denise is on business for his company and kisses her on

the neck to which she laughs and tells him to take a shower as he is covered in sweat. When Terry's birthday party begins she sorts of bosses Denise around and is joked on by her boyfriend when she is at the pool and he literally pulls on her

leg into the pool. As Candice and the others party to nighttime, Oliver shows

up and informs her that half the building is trying to sleep and that he has received a large number of noise complaints and he suggests that they ought to quiet down. The party then ends and Candice sleeps in bed with Terry only to be awoken at 4:27 AM the following morning by what she assumes to be an earthquake outside as well as some unusual blue lights outside.

When Ray gets abducted and Terry and Jarrod go to the rooftop to investigate the matter of the blue lights she tries to find out what is going on by looking on her smartphone only to find that there have been no news reports since 4 AM. She then tells Denise to check on the TV only to find that nothing is being broadcast. When Terry and Jarrod return with images and videos of the alien ships

abducting thousands of people, she feels rather horrified at what is happening. While Terry goes to check on a neighbor of theirs, Candice finds some images of Denise and Terry kissing and glares at Denise. When Terry returns and tries to kiss her, she simply shoves him back and tells him that he is sick and reveals that she knows about Terry's kissing Denise. As a result, their relationship becomes somewhat damaged and Candice and Terry take different cars as they attempt to leave the garage. As Terry's car exits the parking garage, a tanker alien stomps on it killing Denise. As Terry attempts to escape back into the garage, the tanker grabs him with it's tentacles and abducts him. Candice then quickly drives her car back inside and encounters another alien lifeform more squidlike. It swallows Colin causing Jen to panick and run. The alien then pursues the group cornering Candice and the others when Oliver crashes his SUV into the alien. As he and Jen attempt to free him, the alien wakes up, grabs Colin by his

head with one of it's tentacles, snaps his head off of his body, and steals his brain, much to the group's horror. As Candice and the others try to flee back into the apartment, another tanker alien grabs Jen with it's tentacles and abducts her.

Once back in the apartment, Candice and Jarrod mourn Terry to which Oliver criticizes Jarrod for being weak. He then suggests for Elaine and Candice to go to sleep. Before doing so, Candice smokes a cigarette much to Elaine's stress. She then wakes up the next morning to the sound of gunfire. The group then spends the majority of the next day hiding from the aliens, as the group argues about what to do, the U.S. military sends unmanned plane bombers to destroy the alien ships. After a bomber manages to nuke a ship, the group is filled with hope that help will arrive. However, Jarrod discovers that the aliens survived the nuke explosion and that the ship is repairing itself slowly.

He becomes adamant that help must be found outside as military choppers arrive carrying soldiers. Oliver tells him to stay inside and that the choppers are not rescue choppers. Jarrod then attacks Oliver and grabs him by the neck telling him that nothing will stop him from protecting his family.

Candice and Oliver stay inside while Jarrod and Elaine go outside to seek help from the military. While Candice

looks through the telescope and observes what is happening outside, her

veins start to show, she then pulls the bedcloth she and Oliver hung up earlier to help them hide from the aliens, revealing that there is one just

outside. The now hypnotized Candice then walks over to the sliding door and opens it, to which Oliver witnesses Candice walking to her doom. He attempts to tackle her, but is too late as the alien quickly snatches her, and Oliver is forced to watch hopelessly as the alien abducts Candice. As the alien proceeds to attack Oliver, a military soldier fires at it with a bazooka, killing the alien and unfortunately Candice.

Write the second section of your article here. Don't forget to add a category, to help people find the article.

Community content is available under CC-BY-SA unless otherwise noted.
Advertisement